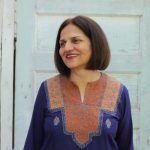 Rukhsana is a playwright, writer and translator. Stage plays include: Song for a Sanctuary, Gatekeeper’s Wife, River on Fire, Mistaken: Annie Besant in India and Letting Go.

Fiction: Her first novel: The Hope Chest (Virago) and her anthology: The Gatekeeper’s Wife (ILQA) are both highly regarded.

Her short stories have appeared in anthologies around the world.

Translations: We Sinful Women: contemporary Urdu feminist poetry (The Women’s Press) The One who did not Ask, a novel by Altaf Fatima (Heinemann).

Rukhsana was RLF Fellow at Queen Mary, University of London.