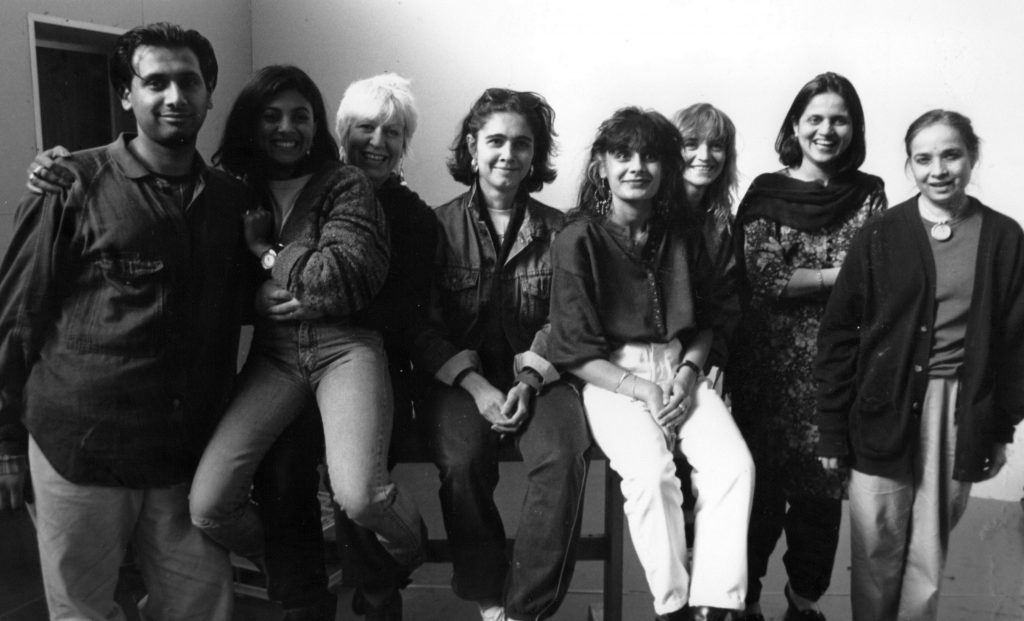 SONG FOR A SANCTUARY 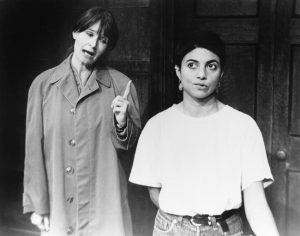 Song for a Sanctuary’ was written by Rukhsana Ahmad and performed in 1992. Rukhsana was inspired to write the play based on the true story of Balwant Kaur, a woman who was murdered by her husband in 1985. When actor/director Rita Wolf heard that Ahmad was writing this play, she suggested they produce it together. They received an Arts Council grant and set up Kali Theatre Company with Song for a Sanctuary as their first production.

The cast of Song for a Sanctuary included: Kusum Haider as Rajinder, Jackie Cowper as Sonia, Rita Wolf as Kamla, Susan McGoun as Eileen, Sanny Bharti as Savita and Simon Nagra as Pradeep. Jamila Massey played the role of Rajinder in the second half of the tour.

“Rukhsana Ahmad’s play about marital violence is an intelligent, absorbing study of an Asian woman trapped in tradition. Director Rita Wolf draws warm, convincing performances from the actors. Too many issue-centred dramas lack the complex ring of truth, but this is an absorbing exception.”
– The Independent

This followed an earlier reading of the play at Riverside Studios

Dramatic Encounters was presented in partnership with Oval House.

RELATIVELY SANE by Parm Kaur
Relatively Sane tells the story of a young Asian woman Sunie and her fierce battle to come to terms with the lunatic world around her.

I WON’T LET YOU GO by Sangeeta Datta
Nisha travels to India in search of her mother Maya… but is her surprise visit really welcome?

DAAG DAAG UJAALA by Shahida Omarshah
Amidst the communal violence of the Partition, two women struggle. Beti fears for the safety of her baby but her commitment to a woman she does not want to betray forces her to risk everything.

TODAY SHAKUNTALA by Mo Bannerjee
Fate is playing an active part in trying to bring together two lovers who met in previous lives. Can it succeed against the odds of their brittle 1997 lives?

THE ECSTASY by Anu Kumar
A poetic drama about a relationship between an upper class Asian sculptor Anthony and his nude Liverpudlian model Jackie – but how does Krishna fit into their lives?

MANGOS AND SACHER TORTE by Bettina Gracias
As Jasmine and David eat at a restaurant, the goddess Kali and a nun engage in a battle for their souls. 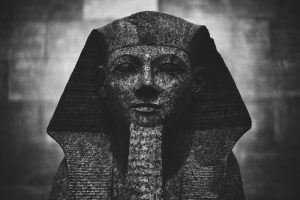 Meeting the Sphinx by Rukhsana Ahmad was a rehearsed reading of a work in progress which tells the story of a challenging encounter between a reputable middle-aged Egypologist and Ms Happy Dossa, a fairly young woman whose appearance is racially unclassifiable, against a backdrop of student unrest at a London University. 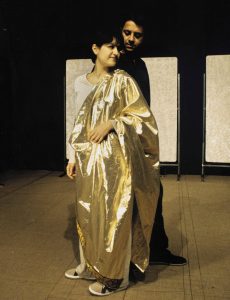 Kali’s second production Natural World tells the story of Benita, a teenager who loses her Bengali mother at an early age to cancer and her father, an Italian jazz musician, who forsakes playing due to an injury. Written by Joyoti Grech, the play discusses the themes of love and loss as Benita begins to explore her own sexuality with friend and classmate Laura Lee, while her father is forced to cope with his own loss and the changes that are confronting his family.

The cast of Natural World include: Nathalie Armin as Laura Lee and Radhika, Ravin Ganatra as Beppe and Martin and Nina Wadia as Benita and Angie. The production team included: Set Designer, Carla Eve Amie, and Lighting Director, Crin Claxton.

Natural World toured in 1997 to the following venues: Oval House and the Tara Arts Studio in London and nationwide, at the Theatre In The Mill, Bradford, The Gantry in Southampton, Haymarket Studio in Leicester, The Drum in Birmingham, Redgrave Theatre in Bristol and the Hawth Theatre in Crawley.

LOVE COMES IN AT THE WINDOW - THE ECSTASY

Love Comes in at the Window was Kali Theatre Company’s first double-bill production featuring The Ecstasy by Anu Kumar and Black Shalwar by Rukhsana Ahmad.

The Ecstasy depicts the relationship between three people, Amit, a sculptor, Jackie, an older woman who becomes Amit’s model and friend, and Sanjay, his boyfriend. It deals with themes of love, friendship and homosexuality.

“Writing, direction and cast combine to create a compelling rhythm that neatly captures the sustained concentration… Clearly a knock-out production.”
– The Stage

LOVE COMES IN AT THE WINDOW - BLACK SHALWAR

Rukhsana Ahmad’s adaptation of Saadat Hasan Manto’s short story ‘Kali Shalwar’ is set in pre-partition India and explores the life of Sultana, a prostitute, whose attempts at finding love are unsuccessful.

The cast of The Ecstasy and Black Shalwar include: Ashvin Kumar Joshi as Sankar, Adele Salem as Sultana and Royce Ullah as Khuda Buksh.

The production team for Love Comes in at the Window include: Set Designer, Sophia Lovell Smith and Lighting Designer, David Lawrence.

Love Comes in at the Window played in London at the Oval House, and toured in 1999 to the following venues: the Harrow Arts Centre, Watermans Art Centre in Brentford, The Mill Arts Centre in Banbury, The South Street Arts Centre in Reading, The Chipping Norton Theatre, Maltings Arts Centre in St. Alban’s, The Gantry in Southampton, Bowen West Theatre in Bedford, Darlington Arts Centre in Darlington, Live Theatre in Newcastle-Upon Tyne, Queen Elizabeth Hall in Bristol and the Hawth Theatre in Crawley.

Meri Kahani (My Story) was funded by the Millennium Festival Commission and was produced in partnership with Southall Black Sisters (SBS), a London based women’s organisation which helps victims of domestic violence.

Meri Kahani took place at Watermans Arts Centre, and was the result of a series of creative writing workshops for SBS members in which participants were paired with experienced writers who served as their mentors.

The stories that emerged from the workshops, both in English and South Asian languages, were dramatised and performed by actors, and in some cases the writers themselves.

The stories featured are: ‘Veil’ by Yasmin Khan, ‘A True Story’ by Fiaz Ghaus, ‘Shazia’s Story’ by Samia Khan, ‘Goodnight Butterfly’ by Manjinder Virk, ‘A Journey to the Unknown’ by Fayeeza Hanoush, ‘A Letter to my Mother’ by Norma Lloyd, ‘Meri Kahani’ by Joginder Kaur, ‘Relatively Sane’ by Parm Kaur, ‘Woh Kaisa Chor Tha’ by Bobbie Wasson, ‘Tea & Jalebies’ by Bettina Gracias, ‘Lingerie’ by Freda Obado, ‘A Quick Chat’ by Kam Dhenjan and ‘The Dirty Mattress’ by Rahila Gupta. The event took place at the Waterman Arts Centre in Middlesex.