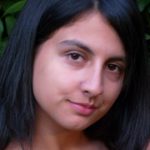 Nessah Muthy is a multi-awarding Writer’s Guild nominated writer, winner of the Character 7
Prize and the Adrian Pagan Award 2018.

For theatre, Nessah is presently under commission to the National Youth Theatre, Theatre
Centre, The Brit School and the Young Vic.

After a critically acclaimed, sell out London run, Small Wonders , (A collaboration with
Punchdrunk) transferred to the Edinburgh International Children’s Festival, Imaginate ,
throughout May and June 2019 where it received five star reviews.

For screen, Nessah has written for Holby City and EastEnders: E20. She is the inaugural
recipient of the Character 7 Prize and is currently developing a number of new ideas for
television.