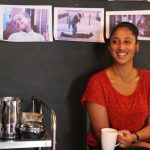 1. What has been your experience working on Discovery?

I’ve worked on Discovery as a mentor twice now and it has been incredibly fulfilling. I’ve worked closely with 8 fantastic new South Asian women writers all telling nuanced stories about their lives – a far cry from the bindi-wearing, bhangra dancing, samosa-eating image of us in the mainstream imagination.

2. How would you describe your role as a writer-mentor? (feel free to discuss what you enjoy about it, what the challenges are)

Although a writer by trade, in the past five years I’ve started to work as a Mentor to new writers which I love doing. There is something so rewarding about working with a writer to help get their script to the next stage (excuse the pun). It can sometimes be difficult to persuade a writer to let go of certain characters, ideas or structures that are hindering the development of the play but I think if you trust each other, that process becomes much smoother.

3. Why do you think a programme like Discovery is important?

The British theatre industry is really hard to break in to so programmes like Discovery are invaluable in providing a platform for new writers. I see it as an incubator – a warm, safe, place where ideas are allowed to work themselves out, and ultimately thrive.

4. What would you say to someone who wants to try their hand at writing?

My favourite writing adage is “writing is rewriting” – it sounds simplistic but it’s incredibly profound. A piece of work can always be made better – don’t expect to get it right the first time – write and rewrite.