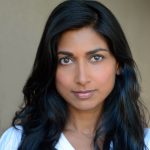 Nimmi’s connection with Kali Theatre goes back to when she performed as the goddess Kali in Bettina Gracias’ play Gandhi and Coconuts.  As a writer, Nimmi has worked as an independent documentary maker and a scriptwriter on Young Asia Television, a weekly pan Asian TV show.  She was commissioned by Tamasha Theatre Company to write a one-person show for a character, Auntie Netta that she had created for her YouTube channel. The one-woman show was also produced by Tamasha and was performed at various theatres in London and at the Edinburgh Festival.  Nimmi has also worked as a theatre practitioner using theatre for rehabilitation with children affected by the armed conflict in Sri Lanka and also with people affected by the tsunami. She has worked with young adult refugees based in the UK through the Pan Centre For Intercultural Arts. She is currently a series regular on The Good Karma Hospital (ITV) and can also be seen in BBC/NETFLIX show Requiem.  My Homemade Kite was initially developed through Kali’s Talkback writer development programme.